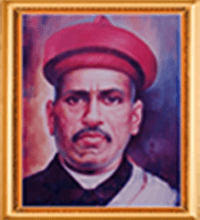 Gopal Narayan Akshikar (1864-1917) was the true and sole founder of The General Education Institute. He merits this title for no other reason than that he created the system of value and moral that constitutes the core of The General Education Institute. Shri G. N. Akshikar was born on 25th Sept 1864 in a village Akshi near Alibaug and hailed from a poor but respectable family. All the way through his life, he encouraged the promotion of education, which he felt is the base to ensure a dignified future. In 1889, G. N. Akshikar implemented his vision to start ‘Dadar English School’, now known as the ‘Chhabildas High School’, which has earned a name for itself all over Maharashtra for quality education.

His assistance for those who pursued education was generous and admired the performance of bright students, more so, he had special consideration for those who were needy. In the year 1890, Shri G. N. Akshikar promoted a high school namely ‘High School, Kalyan (Subhedarwada High School) and M.H. High School Thane in the year 1892.

It was his intention that no child should be deprived of education for want of funds and he did whatever he could to help all.It was his efforts, intuition and dedication which played a major role in the constitution of ‘The General Education Institute’ at Dadar on 24th April 1892. Today his vision has been fulfilled, with 11 secondary Schools, 9 primary Schools, 6 junior colleges & 1 senior college along with more than 25,000 students, perusing their primary/secondary/higher secondary and professional education through The General Education Institute.